It’s our first day in the field together, and we discover that our field site has become a construction site. Heavy machinery and workers in fluorescent orange jackets now occupy the slope of the weir and the adjacent river bank, adding new layers of colour, activity and noise to this river scene of tumbling waters, foraging birdlife, and dense riparian vegetation. The weir is being modified to accommodate two hydropower turbines, amidst much local community support (financial and political) for renewable energy. 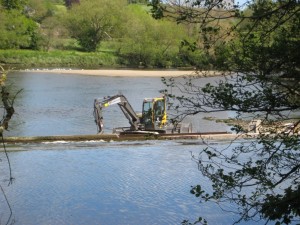 The small bay just below the weir, where Simon and his colleagues used to collect aquatic snails, is now submerged under several metres of rubble. A wire fence around the construction site forces us to shift our activities further downstream. Simon doesn’t seem that perturbed, and resumes his usual routine of slowly wading through the shallow waters in his wellies, stopping to retrieve and inspect large rocks, looking for Radix snails and embryos. The birds don’t seem that perturbed either by the heavy machinery blustering away on the newly constructed work site, certainly not the egret fishing on the far end of the weir, nor the white swan drifting downstream in the nearby currents.

After a false positive and a quick lesson in the morphology of snail shells, Simon finds the first Radix snail of the project. He films the snail’s movement with a GoPro camera, connected to his iPad (albeit with a time lag, something of a temporal disconnect). In fact, we are all generating visual traces in our fieldwork today: Simon standing at the water’s edge with his GoPro camera focussed on a snail on a rock, Debbie wandering along the banks with her professional-looking Canon camera pointing in all directions, and Sophie and I with our low-tech phone cameras focussed on the other two at work.

We had selected this stretch of the River Dart near the Totnes weir as our field site due to its ecological characteristics (i.e. the intersection of saline and freshwater environments, providing habitat for the aquatic snail Radix) and its social significance (i.e. in providing a site for swimming, dog walking, kayaking, cycling, bird watching). Whilst it has somewhat disrupted our original imaginaries of the field site, we quickly realise that the construction of the hydropower facility may yet prove quite generative for us. As he studies a gelatinous embryo on the underside of a rock, Simon muses about the impact of noise on snail development. Debbie wanders off with Simon’s GoPro camera to film the construction site. I wonder about the potential relations between two modes of future-making: the hydropower generator, designed to support a low carbon economy; and biological indicators, designed as sentinels to provide early warning of environmental threats and alarming futures. 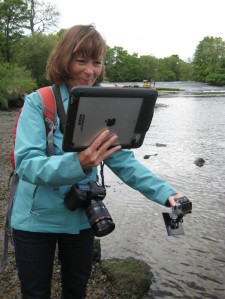