Deborah Robinson and Simon Rundle have been collaborators since 201o when Deborah Robinson became artist in residence in the Marine Biology and Ecology Research Centre (MBERC) at Plymouth University;  a residency that led to the production of a work shown at Deborah’s solo exhibition Transpositions.  They were then joined by artist David Strang whose skills as a sound artist and programmer were central to the realisation of a second project ATRIA (2011). Since that time the group has worked under the name of RADIX, and has developed several innovative, multi disciplinary research projects.

Since the development of RADIX the core collaboration has expanded into a broader cross-disciplinary network including: sociologists, biologists, artists, curators…

Find out more about members of RADIX here: 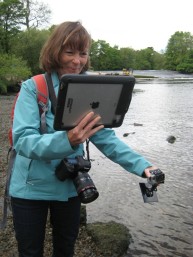 Deborah is an artist and Associate Professor (Reader) in Contemporary Art at Plymouth University where she co-ordinates the ARC (Artistic Research Collective) research group. She is External Fellow with Egenis, the Centre for the Study of the Life Sciences, Exeter University, and a faculty member of the international Transart Institute where she supervises PhD research undertaken through creative practice. Originally a painter her PhD ‘The Materiality of Text and Body in Painting and Darkroom Processes: An Investigation Through Practice’, 2003, engaged with feminist and psychoanalytic theory. Deborah’s work has been exhibited internationally and her research has been supported by fellowships at the Max Planck Institute  for the History of Science, Berlin, and the UK Genomics Forum, Edinburgh.

Simon is a biologist who works on the evolutionary ecology of aquatic animals. His current research investigates the role that the early (embryonic) development plays in the adaptation and survival of aquatic invertebrates. He has also studied art history and has interests in the use of images by biologists as well as in the creative potential of cross-disciplinary research. 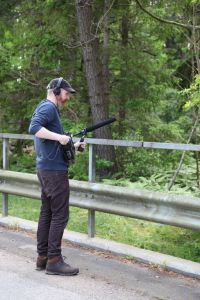 David is an artist who works with sound and interactive elements. His work looks closely at the natural surroundings we live in and amplifies certain aspects to heighten our perception of space/place. Recent work includes site-specific installation, performance, field-recording, networks, re-appropriating media objects, hacking and noise.  David works across multiple disciplines, such as architecture and sciences, exploring data to create artistic outputs. As part of his practice David runs various experimental workshops exploring aspects of sonic arts/hacking/sensors in a multi strand collaborative framework. These workshops are aimed at the transfer of knowledge throughout the group to create an artwork/performance/object in a few days.

Stephanie is a Lecturer in Human Geography at Plymouth University.  Her research focuses on relations between societies and environments, and the ways in which these are imagined, performed, and contested in the knowledge practices of science, environmental management, and policy.  Her primary research interests include:

This research is primarily qualitative and ethnographic, and is situated at the intersection of science and technology studies, human geography, social anthropology, and environmental sociology.

Astrid is a HASS Research Fellow in the department of Sociology, Philosophy and Anthropology at the University of Exeter. She works at the intersections of Science and Technology Studies (STS), Human-Animal Studies and Feminist and Poststructuralist Theories. Her work explores questions of responsibility, care and agency in scientific knowledge production. She has been particularly interested in the scientific studies of marine microbes (such as dinoflagellates). In this and other contexts, she has explored the link between anthropocentrism and conceptions of time. Her current project examines the scientific reconfigurations of life and death through research into programmed cell death in unicellular marine microbes.

Elizabeth is a HASS Research Fellow in the department of Geography at the University of Exeter. Elizabeth’s work centers on the relationship between material processes, knowledge production, and politics. Her research has focused on emerging connections between the bio-sciences, technological innovation, environmentalism, and political economy. She is primarily interested in how “life itself” and its study are increasingly becoming economically valued and politically significant through technological change and patent legislation. She explores how these trends open up new avenues toward life’s privatization and weaponization while also recasting nature as a participatory actor in the process.

Staffan is Associate Professor and Co-director of Egenis, the Centre for the Study of the Life Sciences, at the University of Exeter (England), and also holds an Honorary Chair at the Institute for History of Medicine and Science Studies at the University of Lübeck (Germany). His research is interdisciplinary and international – he held fellowships in Berlin, Stockholm, Mexico City, Tel Aviv, Paris and Minneapolis – and covers the history of the life sciences from the early modern period to the early twentieth century, with a focus on the history of natural history, anthropology, and genetics.

Heidi works with moving image, photography and experimental documentary films.  Her work is rooted in the physical, and she is interested in the social, cultural, mythological and archaeological stories and histories embedded in landscapes. She uses images to explore and gain insight into these and the subtle relationships between them. Her work has been exhibited widely internationally over the past 20 years, and works are held in various private and public collections. She is a lecturer in photography at Plymouth University, UK, where she co-convenes the Land/Water and the Visual Arts Research Group and is part the Photography Research Group (Media and Art Research Centre).

Tabatha is an installation artist who works with sound, silence, light, darkness and material, exploring heightened sensory awareness as a means of allowing memory to surface. Her work transforms different sites and contexts, including forests, cathedrals and contemporary architecture.  She was Artist in Residence at Gloucester Cathedral in 2002-3 and has made work for the Forest of Dean Sculpture Trust, the Centre for Contemporary Art in the Natural World, the Whipple Museum of the History of Science and the Monument to the Fire of London.  She is currently a commissioned artist on the ‘Bideford Black’ project with Burton Museum and Flow Projects, as well as working on Among Remote Lost Objects, an ACE-funded project investigating sculpture and the senses, with shows at ROOMartspace London and Karst Plymouth in 2015.

Susan began her career as a painter working in London and Berlin in the 1970’s and moved to Japan in 1980 where she developed the cameraless approach to photography for which she has become internationally renowned. Cycles of life, death, and change, and their relationship to physical experience are explored through visual metaphors that borrow from science, nature, psychology and art. She is currently working on a series titled Tide Pools which has been developed with assistance from the department of Marine Biology, University of Plymouth and is visiting professor of photography at the University of Plymouth.

Liz Nicol is an Associate Professor (Senior Lecturer) in Photography in the School of Art and Media (Faculty of Arts & Humanities) at Plymouth University. As a photographer Liz has established different working methodologies, these include journeying, collecting objects, and working ‘on site’ sometimes with the cyanotype (blueprint) an early photographic process. The physicality of taking, making and presenting photographs is embedded in her practice, whether working digitally, or photo-chemically.

Liz is interested in collaborations and cross-disciplinary projects, she is currently working on an interdisciplinary AHRC project ‘Remember Me. The Changing Face of Memorialisation’ and collaborating with an ecologist working on the ‘Plants of the Venice Lagoon’.

Bronac Ferran is a writer and curator based in London. She has a MA Arts Letters from Trinity College Dublin and is an Honorary Visiting Research Fellow at Anglia Ruskin University in Cambridge where she is also a guest curator at the Ruskin Gallery. She was formerly Director of Interdisciplinary Arts at Arts Council England and a Senior Research Tutor at the Royal College of Art. She is working on several exhibitions and texts which relate to international developments at the intersection between art, science and technology from the 1960s to today.

Edith Doove is a curator, writer and researcher, specifically interested in notions of emergence and contingency, cross and trans-disciplinary collaborations, artist as curator and curator as artist. She started curating in 1987 in Antwerp and worked as a freelance curator and art critic in Belgium until 2010 before moving to Plymouth, UK. She is a PhD-candidate with Transtechnology Research at Plymouth University looking at, amongst other things, the quality of trans-disciplinary collaborations.